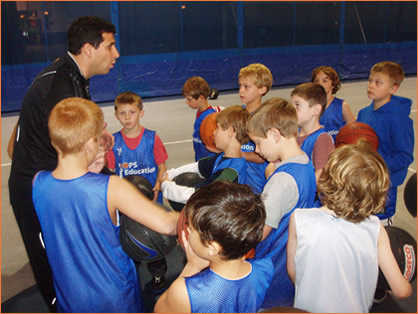 Play Hard Hoops will be starting its 14th season of business with the 2022-23 season. PHH presently runs programs throughout the Chicagoland area including: Buffalo Grove/Long Grove, Vernon Hills,  Lincolnshire, Chicago, Evanston, Lake Barrington, Libertyville, Wheeling, Volo & Lake Zurich. Coach A has been teaching the game of basketball to kids since 1990. His diverse experience has seen him coach basketball at the high school, collegiate and professional level. Adelman has also served as a high level basketball instructor teaching boys and girls from PreK-12th grade through his summer basketball camps, weekly skill practices, clinics and personal lessons.

The Play Hard Hoops Program had well over 2000 participants throughout the season and has continued to work successfully with kids of all ages and abilities despite the health and safety challenges of the past few years. Close to 1500 participants joined Play Hard Hoops Summer Camps in 2022 at 9 different locations.

Coach J-Bone is in his 3rd season as a Full-Time Director where he leads the PHH City Program. Coach J is the director of the Warriors Travel Program in the City and is the top coach and administrator for PHH in the city. Coach J is also involved in the day-to-day growth and direction of Play Hard Hoops in all areas.

He has been part of the PHH program over the past 4 years beginning as a Part-Time Coach where he quickly became a PHH Favorite. Jared has also spent the last four years as a coach at Mount Carmel HS leading their Sophomore Team to an undefeated 15-0 Catholic League championship and 27-7 overall record in the 2019-2020 winter after a 20-6 championship run with the MC freshmen team in 2018-2019. He is a lead assistant for MC's varsity squad now that has sent several players to the college hoops level.

Madeleine was a 4 year player at Maine East HS where they broke school records and made history in her 2015 season. She went on to play Junior College for 2 years where she was a leading scorer as well as team captain before eventually playing at Florida National University, an NAIA D1 School.

Prior to coaching for Play Hard Hoops, Madeleine was working full time for a martial arts company, but quickly realized that the basketball world is where her passion is, and where she belongs. She has always enjoyed working with kids and while she will be involved in all facets of the program, her goal at PHH is to lead the growth of Play Hard Hoops Girls into travel basketball, PHH leagues and skills classes. She is excited to help young girls discover their potential.

Coach Kaye is entering his 2nd year coaching with Play Hard Hoops. During his stint with PHH he has coached weekly skills clinics, leagues, outdoor sessions, summer camps, and City Warriors travel teams. Moving forward he will be the Assistant Director in the city. In this role he will continue coaching all the mentioned programming, as well as co-directing the implementation of the city Warriors Girls travel program.

Coach Kaye brings international experience to our program. Throughout his high school career he represented his state in Australian national tournaments, playing against the best players in Australia and neighboring countries. He has since embarked on a career in education and coaching basketball players from K-12th grade.

Upon graduating with a Bachelor in Educational Studies from the University of Canberra, Australia, he moved to Chicago in 2017. Since living here he has taught physical education and assisted in directing the athletic program at Old St. Mary’s school in the South Loop. During his tenure at OSM he has been the liaison for all things basketball and the school has become a very respectable program within the CCYL. He has head coached middle school boys and girls teams, run clinics for 1st-3rd grade students, implemented alternative programming for students 4th-8th grade, and organized basketball events, including hosting an Australian high school in Chicago for alumni games. Coach Kaye still currently teaches at OSM and has recently accepted a coaching position at Mount Carmel High School, as freshman head coach.

Coach Ron Christians has worked with Play Hard Hoops is entering his eighth year and has directed several of the Play Hard Hoops programs. Ron is a native of Wauconda, where he was an All-Area Player at Wauconda HS before playing four years at Loras College in Iowa. Ron has coached with the Wauconda Feeder program and is a tremendous communicator and teacher. His energy as a coach has helped continue to boost Play Hard Hoops into the premier youth basketball program in Chicago. Ron will continue to direct multiple PHH programs as one of our most beloved coaches!

Adelman served as an assistant coach at the Division 1 level for Loyola University Chicago and Duquesne University for seven years. He then moved on as an assistant at the University of Wisconsin Stevens Point where he helped Coach Jack Bennett lead the Pointers to a 45-10 record, two Conference Championships and an NCAA appearance.

Adelman was then afforded an opportunity to be an Assistant Coach and General Manager of the Westchester Wildfire, a new franchise in the USBL (United States Basketball League) in 2001. He assisted former New York Knick John Starks in leading the Wildfire to back-to-back winning seasons and a 20-12 record and final four playoff appearance in its first year. Adelman also served as an assistant coach for the nationally ranked St Raymonds HS program in New York where he helped St Raymonds win the City Championship and finish third in the State in 2004.