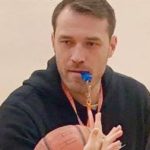 Coach Ron Christians has worked with Play Hard Hoops is entering his fourth year and has directed several of the Play Hard Hoops programs. Ron is a native of Wauconda, where he was an All-Area Player at Wauconda HS before playing four years at Loras College in Iowa. Ron has coached with the Wauconda Feeder program and is a tremendous communicator and teacher. His energy as a coach has helped continue to boost Play Hard Hoops into the premier youth basketball program in Chicago. Ron will continue as the director of programs at Canlan Sportsplex, Volo Sportsplex & the Ela Sports Center.